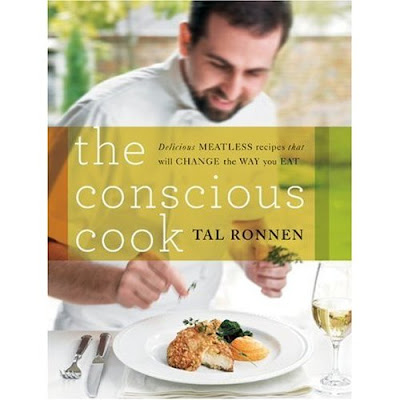 To be honest, when I saw The Conscious Cook my first thought was, "oh, another vegan cookbook", and I wasn't that interested in reading it. No offense to Tal Ronnen, but there are a lot of vegan cookbooks out there (several of which are in my kitchen). However, when I opened the book my mind instantly changed. I was drawn in by the the bright colors, fun layout, and beautiful photos. Suddenly I wanted to sit down and read this cookbook!

What sets The Conscious Cook apart from other cookbooks is the formatting - it looks like so much fun! Important text is in large font so it jumps off the page, allowing you to read key phrases with a brief scan. Recipes are broken down into columns and lists, so they don't overwhelm the eye. The photos are spectacular - each piece of food is perfectly lit against a white background, making it seem like it's floating off the page. There is just the right amount of information about veganism, broken down into brief interviews, guest chefs (featuring Dave from Madeleine Bistro!) and sections like "Why Vegan?" and "Busting the Top Five Vegan Myths". There's even a pictorial display of vegan proteins (does that come in wallet size too?).
Though I have yet to read most of the text and try out the recipes, I believe this could be the best vegan cookbook I've ever seen. Never has a book made me want to cook so badly! Put The Conscious Cook on your holiday gift list - to give or receive (and check out other gift ideas here).
Stay tuned for my videos on the recipes I make, but in the mean time check out Tal's videos on his site.
Read 2757 times Last modified on Wednesday, 25 April 2012 03:41
Tweet
Tagged under

More in this category: « Review: Peace to All Creatures 'zine Fall 09 "Love, Sanae" Book Signing at Mystic Journey Bookstore »
back to top