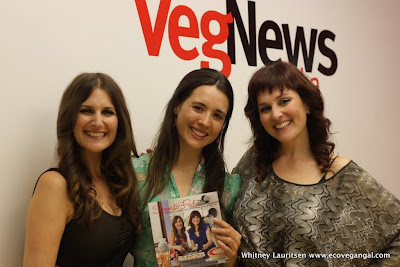 Last night I attended the Spork-Fed vegan cookbook launch at VegNews in San Francisco and had a blast. I know the Spork Foods sisters (Jenny Engel and Heather Goldberg) from Los Angeles and it was great to see them, especially after everyone has been raving about their new book. I can see why - the book embodies their sweet, knowledgable spirits, it's fun to look through, the photos are gorgeous and it's full of important information about cooking vegan.

We dined on some of their food (prepared by Blushing Apple), mini cinnamon rolls from Cinnaholic and glasses of champagne and sparkling lemonade. About 100 people were in attendance on VegNews' newish deck and the vibe was positively wonderful. I met some beautiful new people, including a vegan masseuse and a woman representing a small vegan band! Check out the video for all the highlights from the event - what a time!


Be sure to check out their appearance on a local San Francisco news channel, where they talk about making vegan halloween goodies!!

More in this category: « Review: Peace to All Creatures 'zine Fall 09 Vegan Recipes: Plum Bistro Restaurant Cookbook »
back to top