Kombucha - the new item on the bar menu? 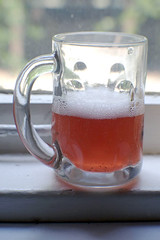 by romanlily
I have loved kombucha (a fermented tea) since it was first introduced to me while working at a raw cafe in 2005. After learning about all of its healing properties, I developed a taste the bitter vinegar flavor and tried every brand on the market. Last year I even made my own at home, which was really fun. There were times I drank several cups of it a day. Everyone around me was trying it, enjoying it, and raving about how great it made them feel. Thus, I was shocked to hear yesterday that it's been pulled off of shelves at natural markets like Whole Foods (this happened weeks ago while I was on vacation). And low and behold, I saw this frightening sign when I went there last night: 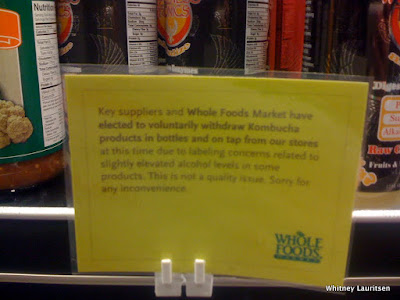 Sorry for the fuzzy image - only had my iPhone with me. This card says:

Key supplies and Whole Foods Market have elected to voluntarily withdraw Kombucha products in bottles and on tap from out stores at this time due to labeling concerns related to slightly elevated alcohol levels in some products. This is not a quality issue. Sorry for any inconvenience.

Why is this happening? Even though kombucha has been around since the late 19th century, it is suddenly big, bad news that it has some alcohol content. Um, duh, it's FERMENTED! Why all the sudden panic?! Kombucha usually has a very small percentage of alcohol (some say no more than most fruit juices), and the drink is really meant to be consumed in small amounts (4-8 oz at a time). It is also a detoxifer, so it doesn't need to be consumed every day (my body rarely wants it that often).

Here are some key points from an article on the Huffington Post:
Planet Green revealed in their article that, "some of the products had between 3 and 4 percent alcohol, which is equivalent to some beers." 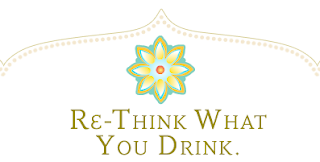 Here are some words from Millennium Products, who make the popular GT's & Synergy kombucha:
My friend and kombucha expert Hannah Crum had this to say on her blog:

My speculation about the situation is that Whole Foods is trying to handle the problem without getting the FDA involved.  OR perhaps the FDA is involved, but is allowing Whole Foods to resolve the issue themselves.  Either way, I am confident that Kombucha will be able to weather this tempest in a (fermented!) teapot and come back better than ever...Adam Goodman of Kombucha Botanica, told me that they will have a "reformulated product on the shelves by September."  Other commercial brewers are also working to quickly bring their Kombucha into compliance with the FDA standards.

I get the impression that a few bottles of kombucha were tested and higher levels of alcohol than normal were found. Labeling is only accurate at the time of bottling, not weeks later when it's been sitting on shelves, so we can't really blame the companies for the issue. But it seems like the labels need to change to reflect the risk.
Like a lot of similar news stories related to health, this seems like a big media hoopla over something harmless, perhaps in an effort to steer us away from clean eating and towards toxic products like commercial sodas. Maybe I'm just cynical, but I wouldn't be surprised... On the plus side, maybe this issue will keep all the kombucha copy-cats away. As much as I love the drink, I think it's pretty suspicious that mainstream beverage companies (who will remain nameless) have started bottling it - seems they're just in it for the money.

In my opinion, for most people who drink alcohol this is no big deal (in fact, they may see this as a healthy way to get a buzz!). For those that don't drink alcohol, this may be a problem. However, I have several straight-edge friends who have been drinking kombucha for years and never complained about feeling strange after consumption. I wonder if they'll stop drinking it though... Also, some say that kombucha is not meant for people with certain medical problems, like weakened immune systems, heart conditions, digestive disorders, or those on medications.

I don't know about you, but after all this talk I want me some kombucha!

What's your opinion on all of this?
Read 5800 times
Tweet
More in this category: « DIY Kitchen Staples: Beans, Beans, They’re Good For You! Why do some vegetarians die of cancer? »
back to top