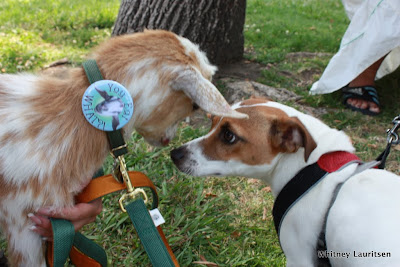 I just returned from a wonderful day at WorldFest. It was similar to last year, but my personal experience was quite difference. Going there on a gluten-free and soy-free diet definitely restricted my food options, but I felt great the entire day and had some fabulous food.
Not to toot my own horn, but multiple people complimented me on how I looked, and I think it's from cutting out gluten and soy. I have trimmed down a little and have so much energy - I just feel great!
I brought Evie, my eco-vegan companion with me, and she had a blast. There were a ton of dogs there and even a gated section called BarkFest where you could let them off leash. Water bowls were scattered around the festival, and there were several shaded areas for people to take a moment out of the warm sun.

Speaking of sun, this year was cooler than last year and there was a soothing breeze. Though, I was very comfortable in my summer dress and I'm glad I put on a good helping of sunscreen!

This year I didn't do as much video footage because I still have some to edit from last year. However, I made a little montage - see below. I was happy to have more flexibility and enjoyed taking my time to walk around, check out the booths, and run into friends. Here are some things you'll see in it:
WorldFest is an amazing event because it brings together so many incredible people. Whether you're a vegan, a vegetarian, an environmentalist, or none of the above, you'll get something out of it. If you're new to the healthy and sustainable lifestyle you'll learn a great deal from the event, and even a seasoned eco-vegan will discover new gems of knowledge.
Did you attend WorldFest? If so, comment below and tell me what your favorite part was.