Rate this item
(0 votes)
Pin It
I've wanted to go to Portland, OR for years because many say it's one of the best cities to be a vegan. I looked forward to trying fun things like vegan corn dogs at Hungry Tiger Too, but when I did I had quite the stomach ache from all the grease and processed soy. Or perhaps it was the trip to VooDoo Donuts that did me in... Don't get me wrong, all of that was delicious and worth a try, but the next day I decided to try the gluten-free and soy-free diet - and boy was I glad I did. I partnered up with former PDX resident Robert Cheeke on this new health experiment and we set out to discover all the options in town. While we jumped right off the gluten, it took us until the end of the trip to stop eating soy, though I'm sure you could have the same meals without it. 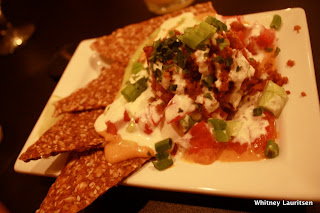 Blossuming Lotus was our first stop. It was beautiful inside and the staff was very attentive (it reminded me of Madeleine Bistro). I enjoyed the food, but it wasn't anything new for me. I had a Ginger-Apple-Lemon juice, Live Nachos, and Green Goddess bowl. I can't say I loved it, but I appreciated it for being so healthy. 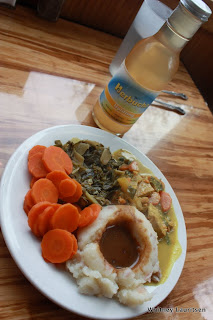 The next day we went to Papa G's, which was my favorite meal the entire trip. Their Coconut Greens were phenomenal. I really didn't expect to love it as much as I did, since it's a really modest looking place, but it hit the spot! I also enjoyed their mashed potatoes and gravy - just thinking about their food is making my mouth water! This restaurant is completely organic, partially gluten-free, and eco-friendly. I also tried Herbucha, a locally made kombucha, and that was really special as well. I met the owner, Grant, at Food Fight and he was really nice. We ended up getting the exact same meal again a few nights later. 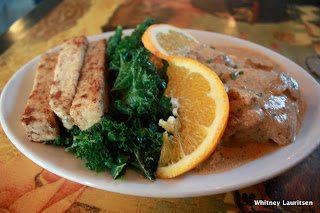 For dinner we went to Chaos Cafe, which was very good but we had some soy while there. We shared: the Red Zinger juice, Biscuits and Gravy (had tempeh), Lone Ranger (had tempeh), and some potatoes. Everything was really flavorful (sauces were awesome) and gluten-free options were marked on their menu. 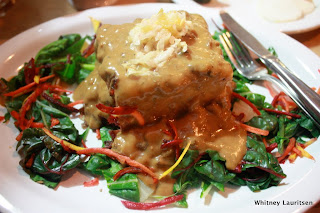 After going to Seattle for VegFest, our first stop back in PDX was Proper Eats where we had: Hummus and Veggie Plate, NoPo Burrito without a tortilla, Shepherd’s Pie, and fresh ginger tea. The Shepherd’s Pie was awesome - perfectly cooked and the gravy rich and salty. Loved the vibe there, staff was super nice, and they even have a little grocery store in the front of the restaurant. 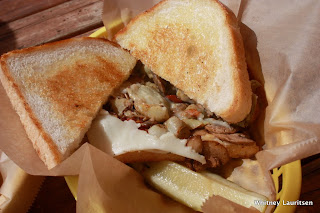 The next day we decided to cheat in order to try The Grilled Cheese Grill, which was fun but not really worth it. The vegan sandwiches were nothing to write home about, especially since they use Tofutti (soy based) instead of better cheeses like Daiya, Teese, or Cheezly. We had the The Southsider and a modified Hot Brie. 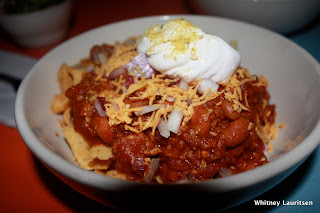 The last stop was at Bye & Bye, a bar with an entirely vegan menu. This was a great place and very memorable - definitely worth going to. Robert and I weren't drinking alcohol so we had Cock 'n Bull Ginger Beer, which was awesome - sooooo flavorful! The food was delicious too; we had: Chili Pie (had tofu soy cream), the Eastern Bowl (which has tofu), and Brussel Sprouts. The chili was really unique because it had Fritos on it, which added a great salty crunch. The brussel sprouts were cooked and seasoned perfectly. Their prices are also quite reasonable.
After all that great food I didn't feel like I missed out on the Portland experience on a gluten-free and mostly soy-free diet. However, I am glad I went to Hungry Tiger Too and VooDoo Donuts - it was delicious even though it was packed with gluten, soy, and sugar.
If I had to pick 2 meals to have again, I'd have the Coconut Greens at Papa G's and the Shepard's Pie at Proper Eats.
Read 5314 times
Tweet
More in this category: « WorldFest 2010 Bob's Red Mill Supports Animal Testing?! »
back to top