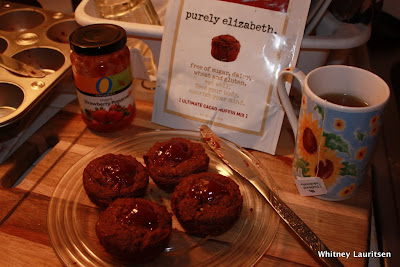 Back in April I made some gluten-free pancakes from Purely Elizabeth, but had some trouble with them - they fell apart in the pan. So, I wasn't sure how the Ultimate Cacao Muffin Mix was going to turn out, but I am happy to report it went well! Like the pancakes, the muffins were flavorful and had a nice hearty taste, but unlike the flapjacks, they kept their form after baking. I made them with my non-vegan friends and, between the three of us, 10 of the 12 muffins were gone within an hour. My friend Robin had the brilliant idea of spreading organic strawberry jam on top of them, which made them even tastier.

The mix contains flax, hemp, and chia seeds and millet flour, therefore it was very nutritious. There is no sugar added, which allows you to add whatever sweetener you want. There is also no egg replacer, so you can use apple sauce (as suggested), flax seeds, or something like Ener-G's product

. As of now, Purely Elizabeth mixes are available for purchase online and a few locations across the country. 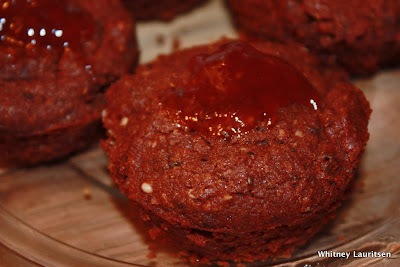 Note: I made a departure from my strict "diet" and used agave nectar and olive oil as called for in the recipe. Since there wasn't a ton of either in them, my body handled the treats really well, but I felt a little guilty. I could have used maple or brown rice syrup instead, but I wanted to finish off the agave in my fridge. However, the muffins were gluten and soy free. 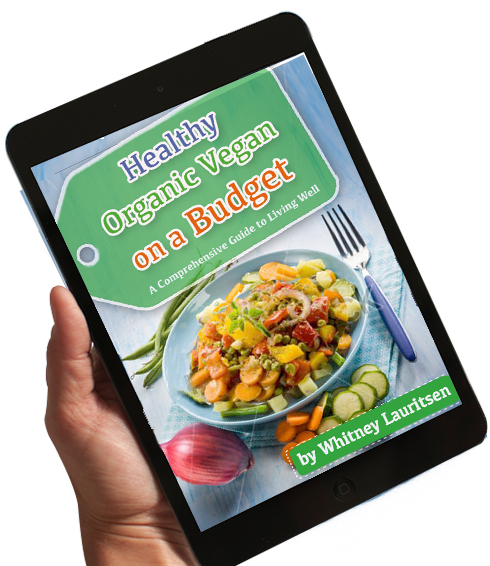 RT @JasonWrobel: ”Being rich and famous is not always the answer to satisfying your needs and desires.” @pjrvs @wellevatr https://t.co/H1pi…