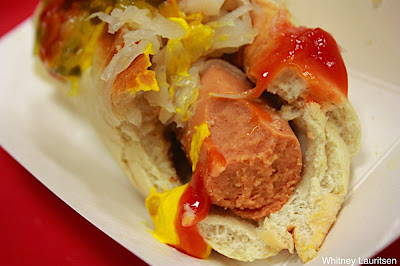 Though I always look forward to visiting, one of the reasons I don't miss living in Boston is that everything closes so early. After 8pm it's hard to find anything to eat, unless you're at a bar, and vegan bar food is scarce. So when my sister and I found ourselves hungry in Bean Town after midnight, we headed over to Allston in search of a vegetarian meal (Allston is home to a lot of college students and therefore a lot of restaurants are open after midnight). Mary and I were thrilled to see that Spike's Junkyard Dogs was open at 12:30am, because I had read about their yummy vegan offerings.

Spike's claims that they have the World's Best Hot Dogs, and I have to say their veggie version was pretty darn good. Their German Shepherd was awesome - covered in their signature mustard and sauerkraut, and I added relish and ketchup on top. Our mouths were tingling for a while afterwards, due to the excellent spice and sour flavors. If you're not into sauerkraut you can order any dog off the menu and make it vegan, or add your own toppings to their veggie dog - they don't charge you extra for the swap. Their freshly baked French bread is perfect - crunchy on the outside and soft on the inside. The Poodle Fries (curly fries) were really good too.

Though I don't usually eat soy or gluten, this was a worthy exception, especially so late at night. They're open until 1am and have several locations in MA & Rhode Island.. Thanks to Vegan Boston's site for letting me know about this place!