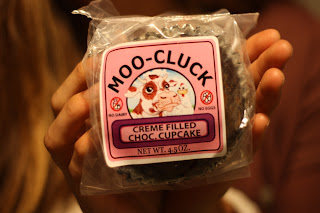 I admit it, I'm a sucker for packaging, so when I saw Moo-Cluck's cute cupcake label in Whole Foods Framingham (MA) and discovered that they are vegan, I couldn't resist. Even though they contain gluten and sugar and they're not organic, I was willing to make an exception and share it with my sister - all because of the packaging. Who can resist a cute cow and chicken advertising dairy and egg free treats? I certainly can't.

The cupcake itself was good, but not the best I've ever had. It doesn't taste like a Hostess cupcake, at least not as I can remember - wasn't quite moist enough. It tasted very chocolatey and was dense. Frosting was great, but there wasn't enough filling inside. $2.99 is kinda steep, but it's so filling it's probably 2 servings for most people. 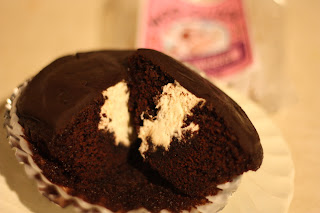 Moo-Cluck is based out of NY and has several vegan desserts at Whole Foods on the East Coast. Definitely worth a try, but if you're organic, gluten & sugar-free like me, I can't say it's worth the splurge because it wasn't that special. However, had it been organic, GF, & SF I would have given it two thumbs up.
Read 3141 times
Tweet
More in this category: « Another gluten-free beer: New Grist Bob's Red Mill Supports Animal Testing?! »
back to top