Last night I saw the documentary Tapped (from the producers of Who Killed The Electric Car), and it was incredibly disturbing - if only you could have seen the look on my face while watching it. I found it interesting timing, because I've recently been struggling with a water issue at home. My Brita faucet filter broke a few months ago and I have been meaning to replace it, but wanted to do some research on other products first - this has proved to be quite time consuming. So out of laziness and frugalness (good filters can be expensive), I've been drinking from the tap. Every-time I turned on the faucet I felt like I was about to ingest a cup of chemicals, but I wondered if tap water is really all that bad. Turns out, in most cases, it isn't. In fact, I found out tonight that Los Angeles has been voted as one of the cities with the best tap water (though this page on EWG makes me question that)

Since this post is long enough already, here are some bullet points from Tapped:
Bottled water: 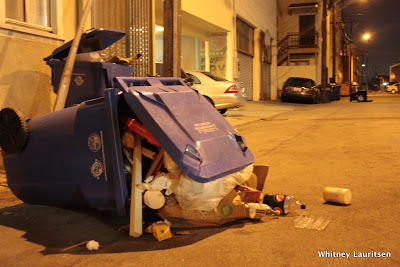 Recycling:
Memorable quotes from the movie and Q&A:
What can you do?
When the movie was over I wondered how many people in the audience would continue drinking bottled water - it's a hard habit to give up, but there are very few circumstances in which I would do it again. In fact, when I got home I gathered my plastic reusable bottles and food storage containers and put them in the recycling bin - I'll replace them with stainless steel and glass. Then I looked around and realized I have a long way to go before I'm plastic free - all my body care products are in plastic too.
Needless to say, I think this movie is important for everyone to see ASAP. It will be available on DVD and iTunes starting on April 3rd. Please support this film - they are having a hard time getting distribution and media spots since so many companies are sponsored by Pepsi and Coke (the "bad guys" in the movie).
The more documentaries I see the more I realize that we're in major trouble - every one of them is waving a red flag. Each of these movies are telling us to break out of the brainwashing that has been done by major corporations. But instead of feeling depressed, I feel compelled to do something about it and to encourage others to do so. Please don't turn a blind eye, don't blow it off as a conspiracy, don't take a back seat and hope for the best, don't slip into the false peace of ignorance, and don't give the government the benefit of the doubt when so many sources are calling their bluff. Worse case you could be wrong, best case you could save your life and those around you.
Read 6106 times Last modified on Tuesday, 15 May 2012 20:24
Tweet
Tagged under

More in this category: « Good Karma: a Sexy New Hybrid by Fisker Better junk mail »
back to top