Homeopathic Remedies for Dogs + Other Companions

Taking care of Evie, my companion dog, is a huge priority in my life. She's about 7 years old now and I do everything I can to make sure that she's as happy and healthy as possible every day. Overall, her health is fantastic. She's thriving on the plant-based diet and has had very few health issues in her life. However, she's getting up there in age and every once in a while a few challenges pop up. Evie has some skin sensitivities and digestive distress off an on, and I worry about the long-term effects of giving her flea medications. That's why I was thrilled to try out a homeopathic detox from HomeoAnimal.

Viewer of the Month: Victor Rivera

Victor is one of those people who gives me a warm fuzzy feeling inside, which is remarkable given that he's a total tough guy on the outside. I'll never forget when we first communicated online - he won a giveaway I ran and his response started with "OMG YESSSSSSS!!!! I've never won anything EVER" and ended with "Thank you, thank you, thank you!" I loved his enthusiasm and passion. About a year later he reached out to offer her personal training services and we've been in touch off and on ever since. Victor is a fantastic role model for vegan men. Ladies, try to contain yourself when you read what an amazing husband and doggy dad he is!

Hey Fellow EvGers! My name is Victor. I moved to Los Angeles (A.K.A. “Vegan Heaven”) about 12 years ago from the Boston area. I have a wonderful wife, son and two cute dogs, and all of us are vegan (yup, our dogs are, too!). I am also a certified personal trainer, wannabe blogger, as well as a student at UCLA, pursuing a degree in psychology.

I would say my vegan journey probably began in my early youthful days, as I have always had a passion for social justice and compassion. I’ve seen firsthand, as well as voraciously read about, the plight of the poor, minorities and women, so standing up for the voiceless and oppressed has always been important to me.

I met my wife, a long-time vegetarian, about eight years ago, and whenever I ate a burger, she would say, “Moooooo.” While I know she was being funny, I also knew that it hurt her to see someone eating her favorite animal. So knowing that I might be with her forever, I decided to look into this vegetarian thing. I began reading “Fast Food Nation,” and was quickly appalled at the treatment of the animals, migrant workers, and the general behavior of the meat, dairy, and fast food corporations. My wife was also reading, “Skinny Bitch” at the same time, so about a day after I decided to go vegetarian, we began planning how to go vegan.

While I went vegan for the animals and the environment, I could’t believe how much my health had changed. As someone who suffered from IBS for 10 years at that point, my condition basically vanished upon going vegan. I also lost nearly 70 pounds simply by changing to a vegan diet, and a basic exercise routine! So these days, I enjoy sharing the benefits of a vegan diet to the world, as well as proving that you can be just as strong and healthy eating plants!

About two years ago, I went to Chef Chloe Coscarelli’s book signing in Santa Monica, and my wife said, “Hey, there’s Eco-Vegan Gal!” I said, “You’ve never told me about her!” Apparently my wife had been following her forever but held out on me. So that night, I went to ecovegangal.com and was blown away! I am totally one of those people with about a thousand different passions and always wondering which one I should “pick,” so I was astounded that someone could combine journalism, physical health, mental health, veganism, hygiene, the environment, how to be your best self, business skills, and about a million other topics under one umbrella.

Not only does Whitney cover all of these categories, she does so in multiple formats (i.e. the regular Eco-Vegan Gal channel, “Live Q and A,” “Uncensored,” and so on) across multiple platforms (her webpage, YouTube, Facebook, Instagram, etc.). So I would say I follow Eco-Vegan Gal because she seems to have a video or article about all things vegan and general day-to-day life issues, and also because her various sites help me improve my ability to have an impact on the world, as well as as better my own personal and family life.

Have you ever wondered if animals have intelligence or if they are capable of feeling emotions like empathy, grief or depression? Have you wondered what makes humans unique compared to all other animals? If so, then "Why Dogs Hump and Bees Get Depressed" by Marc Bekoff is a book you should be reading right now.

Viewer of the Month: Kylie Bennett

I met Kylie when she applied to the EvG Apprenticeship Program - I was instantly impressed with her online presence and can-do attitude, but her sweet personality really touched my heart. She is incredibly passionate about veganism and I love her story about making the transition, as well as her husband's journey to plant-based living. Bonus: the photo of her with Buttercup from Gentle Barn is just so darn cute!

My name is Kylie. I am 34 years old living in Los Angeles with my husband and two rescue dogs, Henry & Willow. I started my vegan transformation just over two years ago. I had a couple of extremely inspiring friends who were vegan and I admired them immensely for a couple years before I realized it was silly to just look up to them when I could join them! I gave myself a challenge: go completely vegan for one week and see how it went. By day 3 I felt noticeably better, lighter in body and mind. At this point the term vegan to me was strictly dietary. I didn't think about all the animal by-products that were in the beauty products I was using and the clothing I was wearing. In that first week I also started reading and researching. I read The Kind Diet and that was a great starting point to open my eyes into what it truly means to be vegan. As I sat there with tears pouring down my face, soaking the pages of the book I knew that I could never go back to the way I was living. I could no longer ignore what was really going on in the world.

Being vegan is a constantly evolving journey. Everyday I learn something new and try my best to make ethical and eco conscious decisions. Luckily, there is a huge vegan community in Los Angeles and online. I have met so many amazing people who share my way of thinking and I get excited when my omnivorous friends tell me they are going vegan. It took my husband a full year of me being vegan before he made the switch (and I didn't even have to beg him, he did it all on his own!). Now the two of us love discovering new vegan places to eat around L.A. and it's great to have a partner in crime ;-)

In my spare time I like to blog about my experiences as a vegan and make things for my online shop Fabulously Fierce. I love unique home decor,
so my main focus is on that, but I do make some embroidered clothing as well. Having a creative outlet keeps me sane (most days)!

Kelly's favorite Eco-Vegan Gal video: Eco-Vegan Gal has been such a great source of information for me as well. Her positivity and knowledge are so inspiring. Whenever I have a question about certain products or what I can do to make smart choices for the environment or just need a little mental boost, I know I can find it in one of her videos! Since I'm not the best at taking care of myself and tend to lose motivation to exercise, I especially love her video "How to Reach Exercise Goals and Make Them a Priority Every Day":

In May 2010 I was interviewed for Natural Dog Magazine about raising a vegan dog. I finally received a copy of it to share with you! Here is an expert - read the article for more, including advice from my amazing friend and vet Dr. Armaiti May: 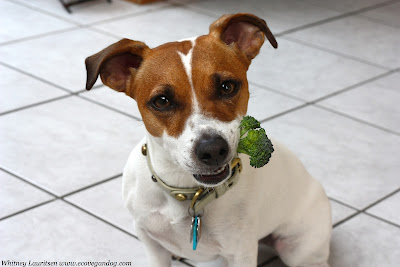 A few months ago I was approached by High Desert Dog magazine, who asked if I would write an article about raising a vegan dog. I received the published issue in the mail today and am so honored to be in a section entitled "Humanely Healthy Diets", which also features articles by PETA, James Peden of VegeDog, and vet Dr. Armaiti May, who have all influenced and guided my journey with Evie. The feature on the plant-based diet for dogs is a wonderful summary of how healthy and easy it is, dispelling many myths on the subject. Check it out!
Published in Companion Animals
Read more...
Thursday, 18 August 2011 15:47

Dogs in the News: Top Articles on Keeping Them Healthy & Happy

Top Ten Cities in the U.S. to Take Your Dog on Vacation

Pets and your health: the good and the bad - "House pets can affect your psychological and physical health in many ways."

Another Overdue Update on Evie

I am so sorry that I haven't been posting on a regular basis. My life has become busier than anticipated, but this blog is always on my mind. For those of you who are still with me, thank you for your support and continued interest.

Evie is doing great. She's over a year old now and is incredibly healthy. I often forget that she is vegan, since it's so easy.
Published in Companion Animals
Read more...
12»End
Page 1 of 2

RT @WhitLauritsen: The key question to ask before dropping something off at Goodwill is: If you needed it, would you buy it in this conditi…

RT @CombatWipes: Who doesn't love being outdoors? But let's be real, when we are out having fun, getting sweaty and tired is inevitable. Th…