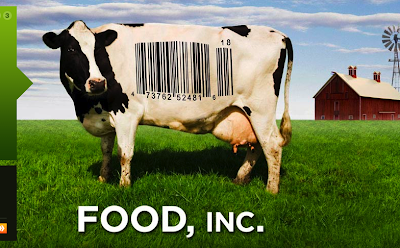 I finally saw Food, Inc. last week in Santa Monica. I was crying within the first 20 minutes - not Earthlings sobs, but a few tears for the sake of the animal abuse (especially the chickens).

The movie was really well done. I was really impressed with it cinematically - loved the opening titles, the cinematography and editing were great, and the pace was just right. I liked how it was split into sections, sort of like Earthlings, but it had a very different tone. Though it was serious, it had a few humorous moments. Though there were some tough scenes in slaughterhouses, the film is overall easy to swallow (at least from a vegan's perspective!). A few parts reminded me of Super Size Me's style.
This is a very important movie for everyone to see, even if you're a health nut or think you know a lot about the food industry. Paul McCartney famously said, "if slaughterhouses had glass walls, everyone would be a vegetarian", and this film proves it.
I felt so thankful to be a vegetarian while watching the film, as it focused mostly on the meat industry. However, there was a lot of discussion on corn and soy, which are in a lot of food I eat. Though I check almost every food label (unless it says "vegan"), I mainly look to make sure there are no animal products. I don't check nutrition facts, sugar content, or corn and soy amounts, and now I think I should. Most vegetarians eat a lot of soy, because it's a great replacement for meat and full of protein. I have been warned to eat it in moderation, but I've never really known why. Now I feel that it's important to find out the cons to eating soy. Food Inc. has a big section discussing soy farming and how corrupt it is.
I also found it interesting to learn that the reason vegetables become contaminated with E Coli is because of run off from cow farms. E Coli is also linked to corn, and farm factory cows are fed a lot of corn.
One of the most disturbing points the film makes, if not the main point, is that food is now all about science and technology. Food is rarely in it's natural form - most of it has been genetically modified. People have found out how to manipulate food so that you get more bang for your buck and it stays fresher longer. Food is rarely about health any more, it's about feeling full and satisfied. And with the economy in bad shape right now, many people buy food based on price, not nutrition. Another sad section of the movie follows around a family in search of food, and they choose to buy McDonalds because it's less expensive then broccoli and pears. Then they wonder why the father has diabetes, and has to spend hundreds of dollars a month on pills - doesn't that defeat the purpose of saving money on food in the first place? What's sad is that most people are unaware of how fast food effects their body - it may be cheap to buy, but in the long run they may spend even more on the medical aftermath of eating that way.
Like Michael Moore's films, Food, Inc. is depressing because it shows the bad side of the government. I had a feeling of helplessness and anger - how sad that these companies are getting away with practices that are effecting our health, and the government is turning a blind eye. Another sad scene in the movie is about a mother who's child died of E Coli and has been unable to pass Kevin's Law to enforce food safety and sanitation standards. Barbara Kowalcyk's struggle to pass the law is devastating and depressing, and shows a very ugly side of the government. After this seeing this movie, I can no longer trust a product just because the USDA or FDA, and that is very sad.
I could go on and on, but I recommend you see Food, Inc. yourself. And if you feel like you already know the information, bring your friends and family. America needs to wake up and realize how their food is made, where it comes from, and the consequences of convenience. Even vegans have a lot to learn because what we consume isn't just about animal cruelty, but health and it's effect on farmers.
The biggest lesson you should take away from this movie is to not only change your eating habits, but VOTE WITH YOU DOLLAR. Everytime you buy a product you are supporting it, you are telling the store that you enjoy it and they should continue selling it. If we stop buying cheap, unhealthy food from corrupt and/or long distance factories we're telling the world that we want a change.
Read 5843 times Last modified on Monday, 14 May 2012 05:51
Tweet
Tagged under

More in this category: « How to Choose the Healthiest Food From A Vending Machine What Food to Buy on A Healthy, Vegan Cleanse (Video) »
back to top