As you'll see in the video at the bottom of this post, my first impression when I pulled up to the new Veggie Grill was really good. The bright lights of the interior burst out throw the big glass window walls onto the rainy street, beckoning me in. It took the place of a Sizzler (thank goodness) and shares the lot with a Poquito Mas (a really good Mexican chain, though not sure of their vegan friendliness). Inside it looks just like the other locations: the same bright colors, wooden tables and chairs, big menu on the wall, cash register, exposed kitchen, and drink/condiment station. Like their other locations, they have free parking (in the back) and their staff is incredibly friendly and attentive. 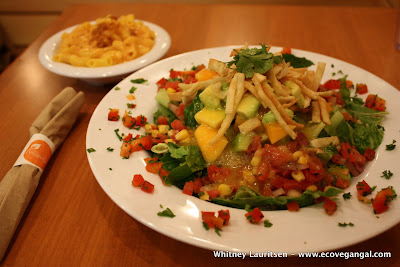 The menu is the same as the pre-existing Veggie Grills, so I don't have anything new to add about my thoughts on the food. Check out a previous review: Veggie Grill WeHo: Review & Interview with Kevin Boylan. I had a hard time choosing off of the menu because there are so many options, even if you're gluten-free like me. They even have a list of items that are soy and wheat free! I finally opted on the Baja Fiesta Salad and the Mac & Cheese, and was sure to snag one of my friend's Sweetheart Fries dipped in their amazing chipotle ranch dip. It was all delicious as usual.

While dining I sat next to a non-vegetarian man who had never been to Veggie Grill. He had the Carne Asada, and while eating it he turned to one of the owners and asked if it was real meat or not. Despite the name, many people go into Veggie Grill and don't realize it's vegan, which is really a nice example of how tasty plant-based foods can be. 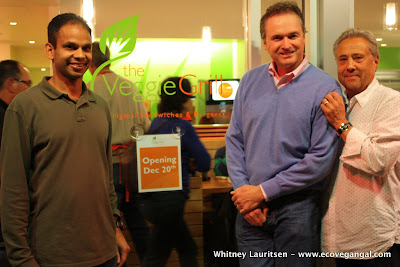 My favorite part of the evening was spending some time with the owners. I have known Kevin since I interviewed him when the West Hollywood location opened and love his amazing customer service. He was excited to share that Veggie Grill has served over 1 Million people - take that McDonalds!! I also took the opportunity to ask him about the ingredients used and he clarified that they don't use any GMOs and buy organic whenever in season and local (buying an organic tomato from a distant country is not in line with their standards).

Veggie Grill is taking Southern California by storm and I can't wait until they move across the country. This business has the potential to become a huge "fast-food" chain - they can be at least as successful as Chipotle. Want to see that happen? Show them your support by visiting their locations and following them on Facebook and Twitter and demand (with your dollar) that they continue to grow.

More in this category: « Eco-Vegan Eats in Portland, OR 118 Degrees - Raw, Organic Restaurant. Plus Interview w/ Jenny Ross (video) »
back to top

RT @livingmaxwell: Organic clothing and textile pioneer @marcizaroff will have a FULL HOUR to herself talking about the importance of #orga…