Are you a vegan purist? 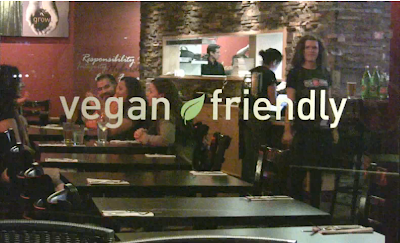 Someone commented on one of my posts recently saying that they were not interested because the restaurant wasn't entirely vegan, and called themselves a "purist". This isn't the first time I've heard that term of course, but it got me thinking...
There are a ton of completely vegan restaurants in Los Angeles, and a lot of different types, so you'd wonder why I'd bother going to non-vegan restaurants. Usually I go with non-vegan friends, so it's a compromise. I'm used to watching them eat animal products in front of me and I don't judge them for doing so. However, I make a statement when I ask for vegan items, especially if they have to be specially prepared/are not on the menu - perhaps my non-vegan friends will be inspired by this, and perhaps this will show the chef that there's a demand for vegan food. Speaking of the latter, most restaurants I feature are more than happy to make me a special vegan dish, and seem excited to do so.
I also go to non-vegan restaurants for variety and out of convenience. Though there are a lot of vegan joints in L.A., they aren't all near me. However, there are a handful of non-vegan restaurants within walking distance from me (thus eco-friendly) where I can get a great vegan meal (take Mao's Kitchen for example, because I can't go to Seed everyday! Well, I could...).
And when I travel outside of L.A. it's a whole other story - I almost always have to eat at non-vegan places. But I'm thankful that so many restaurants offer vegan options, especially when the staff fully understands what it means.
Of course when I eat at non-vegan restaurants there's always a chance of cross contamination, and that definitely grosses me out. Of course I'd rather support entirely vegan restaurants, especially in this tough economic time. But I'm not a purist.
What are your thoughts on this? Do you consider yourself a purist? Do you go to non-vegan restaurants? Why or why not?
Read 4235 times
Tweet
More in this category: « Sustainable Restaurants Bob's Red Mill Supports Animal Testing?! »
back to top