Mocking the real thing: can fake chicken save the world? 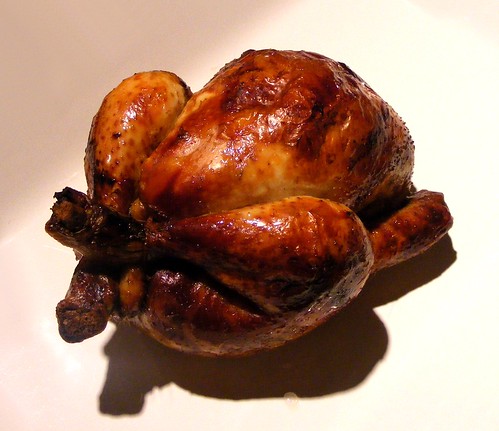 There was an excellent article on Time Magazine online yesterday: "Creating Chicken Without the Egg". Some scientists have created a chicken alternative made from soy, which is very similar to the real thing in taste and texture.

the first soy product that not only can be flavored to taste like chicken but also breaks apart in your mouth the way chicken does: not too soft, not too hard, but with that ineffable chew of real flesh.

While this product is incredibly processed and contains several ingredients that I am currently avoiding (soy, gluten, and oil), it's exciting that something like this has finally been developed. The most common reason people give to me as to why they enjoy meat is the taste and texture, so this could result in a big change.

Here are some interesting quotes from the article (by John Cloud):

The desire to eat meat has posed an ethical question ever since humans achieved reliable crop production: Do we really need to kill animals to live? Today, the hunger for meat is also contributing to the climate-change catastrophe.

annual sales of soy products totaled $4.1 billion in 2008, up from $300 million in 1992. But $4.1 billion is, to use a food metaphor, just peanuts. Americans spend something like half a trillion dollars on real meat every year.

Before an animal is killed, its flesh essentially marinates, for all the years that the animal lives, in the rich biological stew that we call blood: a fecund bath of oxygen, hormones, sugars and plasma. Vegan foods like tofu, tempeh (fermented soy) and seitan (wheat gluten) don't have the benefit of sloshing around in something so complex as blood before they go onto your plate.

the way the meat broke across my teeth felt exactly how boneless chicken breast does. It was slightly fibrous but not fatty. The soy wasn't mashed together as in a veggie burger; rather, it was more idiosyncratic, uneven, al dente — in other words, meatlike.

Maybe one day you'll order a chicken fajita at Chili's that is made with soy. You almost certainly won't notice the difference, but the planet will.

What are your thoughts on this development?
Read 3054 times
Tweet
More in this category: « Upcoming events in L.A. not to be missed Bob's Red Mill Supports Animal Testing?! »
back to top