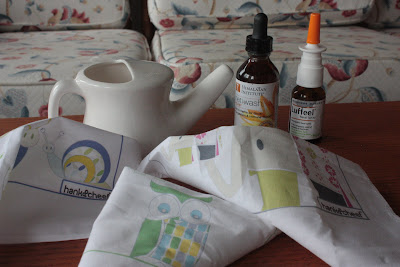 I've had bad allergies since I moved to L.A. (go figure). For years I tried every pill, powder, and spray on the market. I consulted several doctors and gave acupuncture a try. And nothing worked. Still awful headaches, sneezing, and running nose. So I gave up and used Flonase for several months, which was the only things that made a difference. However, I always felt guilty about it because it's a steroid with who-knows-what long term effect on my body. My chance to give it up came when my insurance ended, and instead of $20 a pop for Flonase it would cost $130!

I took a trip to the CoOp and decided to give the natural remedies another try. I picked up some Neti Pot wash (even though the Neti Pot never seemed to help before) and some homeopathic nasal spray (called Luffeel). I've been Neti-ing every night before bed, and sometimes in the morning if I have congestion. And I take the nasal spray in the morning and at night.
To my surprise, this routine actually seems to be working. Now, I'm not completely sold on it because my allergies tend to trick me - they'll seem to improve for a while and then suddenly strike again. But, for now, I'm happy to use a natural remedy.
To top it all off, Hank and Cheef sent me 3 of their organic cotton handkerchiefs and they are adorable! Though I feel a little like my father, using a handkerchief will save a lot of tissue, thus being very eco-friendly. Besides, the designs are very modern and fun, so I'm excited to show them off. Did you know that it takes 90 years to grow one box of tissues? Check out more facts on tissues on Hank and Cheef's site.
Read 7042 times Last modified on Sunday, 15 July 2012 06:40
Tweet
Tagged under