The 911 attacks on the WTC are still as chilling today as they were 10 years ago. So many emotions come up for me: sadness, fear, confusion, nostalgia - but most of all, compassion. September 11, 2011 was a day when we remembered to love strangers, no matter who they were, what they looked like, or what they believed in.  We all came together because we needed that - we needed to feel connected. Every year we're reminded of this, but unfortunately it's not long lasting for most.
Published in Inspiration For The Mind
Read more...
Saturday, 27 August 2011 16:29

My Perspective on the "Veganism is Offensive" Discussion

If you haven't been following the "veganism is offensive" discussion, you can read my post on it here and/or see the on-going input on Facebook first here, then here, and here. In the multiple discussions, I received nearly 100 comments in 24 hours - clearly this is a hot topic.

I've tried to keep myself out of this for the most part and take the role as moderator, but since I started the discussion I've been brought into it. Some people thought I was asking if I came across offensive, but I was asking if vegans as a group did. For the most part I've received some really enlightening comments, but despite trying to keep it neutral, harsh or defensive comments arose from both "sides" (veg and non-veg). And, a few people commented that they think that I am "enabling abuse" by accepting everyone, and "propagating" the idea of vegans being offensive.

Where Do We Draw the Line Between Pleasure and Being Selfish?

No wants wants to be considered selfish - that's a painful word. But the reality is that we spent the majority of our lives being selfish - it's simply in our nature. I guess the definition and use of the word is what really matters. To me, being selfish means doing something pleasurable at the expense of others, and unfortunately so much of what we do in American society falls into that definition. 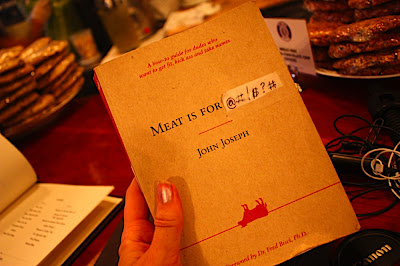 As I write this post, there's a cool party happening in L.A. to celebrate the launch of the new book Meat Is For Pussies by Cro-mags vocalist John Joseph. Unfortunately I'm missing it because I'm out of town, but I've heard rave reviews.

Last night while dining at Candle Cafe in NYC, I saw a copy of the book with the word "pussy" covered up by a bunch of grawlixes. I thought that was pretty funny because I'm not offended by the title. Though I rarely use profanities, I'm usually not bothered when other people say them - it's just part of the language sometimes. In the case of this book, I'm glad the word "pussy" is used because it is attention grabbing. Much like "Skinny Bitch", people will pick up this book and want to read the description or first page. Or, if offended, they'll talk about their feelings to other people, which gives it more publicity; it really can't go wrong in my opinion.