Will Tuttle on "The World Peace Diet" at Madeleine Bistro 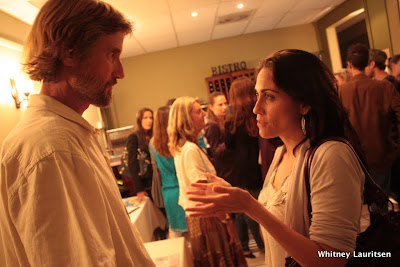 Last night I gathered with a bunch of amazing vegans at Madeleine Bistro to see Will Tuttle talk about his book "The World Peace Diet" (which has been #1 on Amazon). Though in a way he was preaching to the choir, he had some really great things to say, and taught me some language I can use to explain why I'm a vegan.
As the title clearly states, this book is about world peace - something all humans want but don't entirely strive for. Many see the term as a joke, as something we'll never achieve. Will thinks it's possible because we simply need to come together as a community and remind ourselves how important we are to each other. There are lots of places we could start, but Will believes we need to begin with the animals.

He made a great point about the effect of eating animals -  people are consuming the torture, panic, and fear they faced before death, which goes into the body on an energetic level. Will stated, "what we do to animals, we eventually do to humans". No wonder many suffer from anxiety and depression - they are literally eating it. Animals don't usually retaliate when being tortured, but many feel their revenge in the form of disease from eating animal products.
Will articulated it well when he said, "it's not a good idea to be well adjusted to a sick society". I often feel this way when I hear people making excuses to eat poorly; I'll admit there are times that I try to justify bad food (*cough* sugar). But Will's point is that we are living in a world (the United States especially) where we are encouraged to do things that aren't ideal for our health - physically and emotionally - and this needs to stop. He also said that there is "a curtain behind peace and sustainability" - both are being promoted, but behind the curtain is a lot of corruption. Our "fundamental wisdom has been hijacked and we are disconnected", so we need to "come home to our true nature". Will believes that it is time that we "awaken from a consensus trance" and "question the assumptions of reality". That is something I feel very strongly about - I do not want to live my life in a way that I've been programmed, just because someone suggested it, or because I saw an ad on TV telling me it was right.
"Food is the intimate connection to culture", but the way most people eat is centered around a "mentality of elitism". If you look back upon history you'll find a long trend of using animals, especially to show off wealth, so manipulating and abusing them is deeply imbedded in our culture. Will says we need to "transform the core of culture" and "walk out of the prison" of conformity. We also need to let animals out of the prison, because "whatever we most want for ourselves, we must give that to others", and that includes all empathy for all creatures. "Real health comes from kindness and compassion", and right now we're living in a very toxic environment.

Will's biggest message is to encourage each person to create a community of true peace, and that will eventually spread to the rest of the world. You can read more about this topic in his book of course.
Read 3128 times
Tweet
More in this category: « Natural Products Expo West: Sunday, March 14, 2010 Bob's Red Mill Supports Animal Testing?! »
back to top