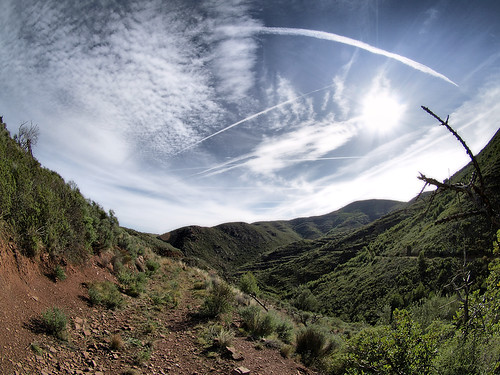 Chemtrails are defined by Wikipedia as,

chemicals or biological agents deliberately sprayed at high altitudes for a purpose undisclosed to the general public...The existence of chemtrails has been repeatedly denied by government agencies and scientists around the world.

Theories on chemtrails range from beliefs that they will protect us from global warming to fears that they're a method of population control. Some say they're just common contrails or vapor trail from aircraft exhaust. Check out the video below to see what these filmmakers have to say:

If you don't have time to watch the video yet, one of the most frustrating points it makes is that chemtrails is killing our organic plants and forcing us towards a GMO future. This may sound like a conspiracy, but with all the corruption within companies like Monsanto, how could one be surprised?

This concept makes me feel like all the work I do to be healthy and sustainable may not get me very far. I don't have any control over what is sprayed into the air. I wouldn't be surprised in the least if chemtrails are real, especially since everything I'm learning about health now is practically the opposite of what the government promotes and spends it's money on.

If you'd like to read more about chemtrails, you can easily find info by doing a web search, but here are the articles I found most enlightening:

More in this category: « Interview with Tamara Henry, aka Green T Gulf of Mexico oil spill: what's going on and what can we do? »
back to top