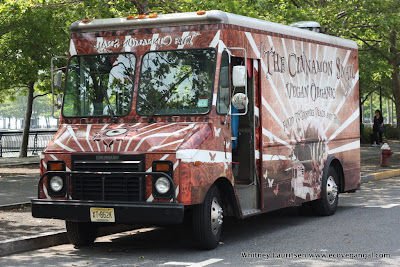 Food trucks are all the rage - somewhere between take-out and dining in at a restaurant, it's a fun and convenient way to eat. Unfortunately, vegan options are often lacking at these meals on wheels, aside from the occasional veggie burger, chili fries, dosa, or gourmet popsicle. However, there are a few saving graces (i.e. vegan food trucks) across the country - there's Seabirds Truck in the Orange County/LA area, Sunny Vibrations up in San Francisco, GMonkey in Connecticut and The Cinnamon Snail in Hoboken New Jersey (and perhaps others I don't know yet). Today I'm excited to feature the latter, a truck I didn't think I'd get to try due to it's seemingly random East Coast location - but taking a little detour on my way to NYC this summer was beyond worth it.
Editing this video of The Cinnamon Snail was kinda torture - it brought back too many fond memories of the delicious food, fun vibe, and beautiful location - I wish I could be there again right now. That's always a good sign - when a food establishment leaves you with such a positive, lasting impression that you yearn for more. As you'll see in the video, I loved their food - it is fresh and very flavorful, with unique menu offerings like Lemongrass 5 Spice Seitan, "200 year old frog man breakfast jamboree", and one of the most incredible selections of vegan pastries I've ever seen (with a few gluten-free options). 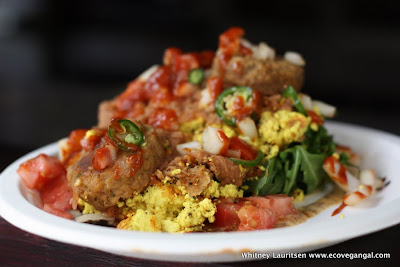 This fantastic food is served up by the hilarious and thoughtful Adam Sobel, a graffiti artist turned chef who knows that introducing people to vegan food can help make the world be a better place, health-wise and environmentally. To sum up what he wants to accomplish with his food, check out what's written on the side of the truck: "Food to help you transform into a being of  pure light who can serve all living creatures simultaneously and eternally." In my opinion, he's certainly achieving that. In fact, lots of people must agree - there was a line of customers the entire hour that I was there, and Adam said that was a slow day. One of my favorite stories that he told me was of the police officiers who were skeptical of the vegan food until they tried his donuts, who eventually tried actual meals off the truck and became regulars - vegan donuts are changing the world! 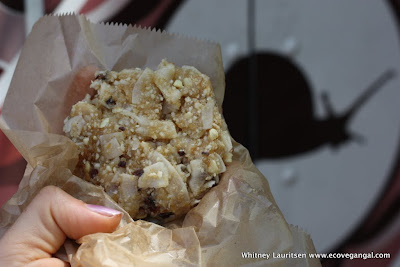 Speaking of changing the world, Adam knows that veganism doesn't always equal health and sustainability. Along with the sugary, glutenous offerings he also serves up some great raw food and is happy to work with almost any diet (except macrobiotic - he says that's too boring for him!). The ingredients are 96% organic and local whenever possible. If you don't have To-Go Ware (or forget to bring it), you can chomp down your meal with biodegradable utensils. And save a buck for the Farm Sanctuary donation jar! I give this truck the Eco-Vegan seal of approval!

You may be wondering why Hoboken, NJ and not New York City? Because Hoboken is the most densely populated urban area right outside of NYC. Plus, it's the only vegetarian restaurant in that city - Adam says that you could count the vegan options in New Jersey on one hand. So don't let the location deter you from checking out this truck - it's so easy to get to. I stopped on my way from another part from NJ to NYC - just had to transfer to the PATH and then walk a few blocks. Trust me, once you see how gorgeous that area is you'll be glad you made the trip - sitting in front of the river overlooking New York is a perfect way to enjoy breakfast or lunch.
After you fall in love with The The Cinnamon Snail, get them to cater your parties, corporate events, weddings, and film sets - check out Adam's site Certified Orgasmic (great name!).

More in this category: « Vegan options in and outside of Boston New items at Veggie Grill with Daiya cheese! »
back to top