Eco-Vegan Eats in Portland, OR 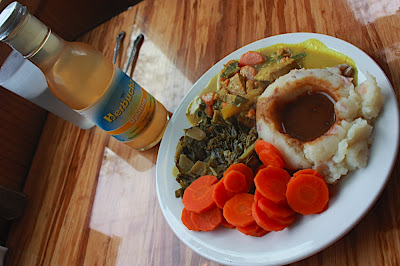 I have only been in Portland for a day, but I have already done so much and I'm having a blast! I'm making videos of it all, but it may take me some time to get them up, so here's a summary in the meantime.

My first stop was Food Fight, an entirely vegan grocery store. It was such a relief not to look at any labels. Though I was familiar with most of their products, there were a few that I was excited about, like some really good vegan gummy candies and rose tea kombucha.

Then I headed next door to Herbivore, whose products I've seen all over the place online and in Los Angeles. I really liked the vibe of the store and saw some cool items, like handbags and books. The owners were also super nice.

My first meal was at Hungry Tiger Too, where I tried their famous vegan corn dogs. Those were quite greasy, but very tasty. I also had their SouthEast Club and BellyRocker sandwich (with Daiya).
For dinner I went to Blossoming Lotus, which has a lot of raw food. It was beautiful inside and the staff was very attentive (it reminded me of Madeleine Bistro). I enjoyed the food, but it wasn't anything new for me. I had a Ginger-Apple-Lemon juice, Live Nachos, and Green Goddess bowl.
To top the night off, I went to Voodoo Doughnuts, which is a really hip place. Though it's not entirely vegan, they have a separate section for their vegan offerings. I tried 4 different flavors and they were all yummy - reminded me off a cross between Mighty'O and Ronalds.
I stayed in the beautiful LEED certified Avalon Hotel & Spa. This was one of the best hotels I've been to, because it is affordable ($100 for 1 night), comfortable, quiet, clean, and green - and the staff is fantastic. It's right next to a bay, so it felt really natural.
My favorite meal so far was at Papa G's this afternoon - their Coconut Greens were phenomenal. I really didn't expect to love it as much as I did, since it's a really modest looking place, but it hit the spot and I would be happy to go back again tonight for dinner! I also tried Herbucha, a locally made kombucha, and that was really special as well. This restaurant is completely organic, partially gluten-free, and eco-friendly. I also enjoyed their mashed potatoes and gravy, and curry tofu. I met the owner, Grant, at Food Fight and he was really nice.
I walked around in Mirador, a really cute eco shop, and was excited to find an artichoke steamer! : )
Believe it or not, I have a lot more to see in Portland. This city is uber eco-vegan and I'm loving it here! Though, the weather has been quite chilly...
My tour guide for this trip has been the lovely Robert Cheeke, who has lived in Oregon for many years. His new book just came out and he's been promoting it. I'll be traveling with him to Seattle tonight, back to Portland after the weekend, and then we're driving back to Los Angeles with a stop in San Francisco.
Stay tuned... ; )
Read 6356 times Last modified on Thursday, 04 October 2012 04:58
Tweet
Tagged under

More in this category: « Sauce on Hampton: review and interview with Sassan Restaurants with Healthy Meals Near Expo West at the Anaheim Convention Center »
back to top