Food For Thought: Would You Eat Dairy & Eggs From Your Backyard? 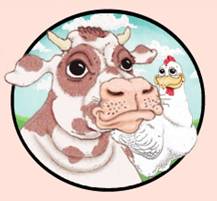 If you're a vegan you're used to getting a lot of questions about your lifestyle. Some questions come out of curiosity, others are meant to challenge your beliefs. One question I receive pretty regularly is: "if you had a cow & chickens in your backyard, would you drink milk & eat eggs?" In other words, is the cruel dairy industry and lack of control over it what's stopping you from consuming? Most vegans will answer no to this (including me) because they don't want to use animals in any way, no matter what. However, there are certainly some who become vegan to boycott the meat and dairy industries, so they may eat dairy and eggs if in the backyard.

I grew up on a small farm with chickens as pets yet my family eats their eggs, my friend across the street has ducks for their eggs, and the family down the street raises livestock solely for the purpose of eating them. Though I don't eat any of these animal products, I will say that if someone is going to I'd rather they do it this way. The people I know that do say they do it for taste and health. While taking eggs from birds nests doesn't disturb them too much, I can't imagine taking an animals life for food, especially after they've lived in your backyard and might even have a name...

But this post is about dairy & eggs, not meat. The reason I'm often asked the above question is because it doesn't seem very cruel to take these products directly from animals that are living a happy life. My personal view is that we shouldn't take anything from living creatures, including dairy and eggs, for the following reasons:
There are a lot of other reasons not to consume mil and dairy and many of them were vocalized when I posed this question on Facebook & Twitter, such as:
Some pro dairy or egg comments:
Got another opinion? Share it in a comment.
Read 1232 times
Tweet
More in this category: « Another gluten-free beer: New Grist Bob's Red Mill Supports Animal Testing?! »
back to top

I stand for justice. I believe Black Lives Matter. I'm doing my best to understand and spending a lot of time liste… https://t.co/gOGH33cpJz