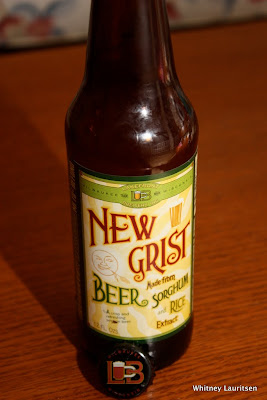 While shopping at Co-Opportunity this evening I stopped at their beer section to see what gluten-free beers they had. The entire selection is very modest, and after a quick scan I didn't see any of the GF drinks that I often find in Whole Foods. I was upset for a moment - how could my favorite market not have gluten-free beer? However, during my second scan my eyes landed on a bright label with some of my favorite works: gluten-free. I grabbed a 12 oz of New Grist and decided to give it a shot.

Before I popped open the lid I decided to do a website search to learn more about the company. The Lakefront Brewery site doesn't have much info, though I learned that they're based in Milwaukee, which isn't exactly local to Venice Beach. Then I checked out some reviews. Daily Beer Review was the first that I found, and unfortunately they didn't have anything nice to say, though some people in the comments like it. The general consensus on Beer Advocate wasn't very positive either, so it got a C- rating. Needless to say, my expectations were low, despite the cute label and that it's sold at a market that I trust.

However, my reaction after the first sip wasn't very negative. My initial thought was that it's very light in flavor. It was also very foamy, though that could have been because I took it home in my bike basket. Others have described it as fruity, which I can agree with, but it's so subtle it's hard for me to tell. Overall, I didn't hate it and I didn't love it. I'm not too picky of a beer drinker, so as a gluten-free vegan I would be happy to have it if it was the only choice. Though, I'd rather go with Greens or Samuel Smith cider if given an option. And, while researching New Grist, Bard's Tale was recommended, so I'll have to give that a shot if I stumble upon it (according to their Twitter account, Trip in Santa Monica has it). There's also O'Brien from Australia, Sprecher, New Planet (only available in Colorado), and ciders are usually gluten-free - love that I have some choices!

If you're in L.A. too, check out these resources on where to find GF beer in town:

More in this category: « I spy with my little eye...vegan cheese in the dairy section! Veg Options in San Diego For Comic Con »
back to top