With Sir Richard's Condoms, Vegan Sex Has Never Been Better 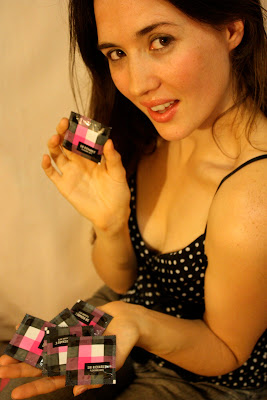 If you get excited about having safe sex, prepare to be tantalized. There are new condoms on the market and they're pretty damn sexy. It's time to ditch the Trojan man and meet your knight in shinning armor. Let me introduce you to Sir Richard's, who claim they make the world's finest condoms; and I have to agree. I recommend you skip to the bottom to watch me talk about why I love sex these condoms instead of reading this relatively boring post - but it's your prerogative.  ; )


Sir Richard's is a new brand of condoms that happen to be vegan, which means they don't contain the milk protein called casein. This is probably news to you, as few people realize that the most popular means of sexual protection contains animal products. While there are a few other brands that market their condoms as being vegan-friendly - such as Glyde, Condomi, Kimono, and French Letter - none of them have received as much buzz as Sir Richard's. That's because this brand was designed to make you want to have safe sex and to feel like you're doing it in style - what a fantastic idea.

The packaging of Sir Richard's condoms is brilliant - it's simple yet sophisticated - and the wordage on the box is informative yet cheeky. They've also done a slick campaign via stickers to let you know how the costs of raising a child vs what you'd save if you used condoms instead! If Sir Richard's doesn't make you want to have safe sex I don't know what will. 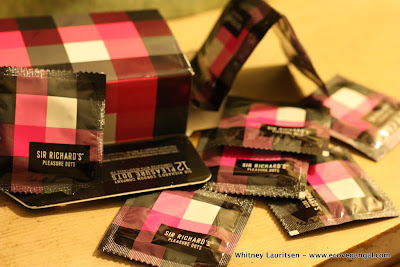 The company believes that they are the most ethical condom on the planet - why? Because for every one you buy a person in a developing country gets a free condom. The man behind Sir Richard's, Mathew Gerson, wants to help prevent unplanned pregnancies and the spread of HIV, and feels the best way to do this is to educate the world on safe sex and make condoms available to everyone. Mathew happens to live right down the street from me and I can tell you that he is truly passionate and dedicated to this mission. You can learn more about his initiatives in this great video by Take Part.

Unfortunately there's currently no major eco benefit to these condoms (aside from preventing over population). Apparently the FDA has really strict guidelines on packaging, so neither the box, ink, nor the wrappers are made of anything particularly green, though Mathew has dreams of it being so. They're also not fair-trade as of now due to the cost, but perhaps this will change in the future. However, you can do your part and remember not to flush used condoms down the toilet and send them into our water system - instead, wrap them in some (recycled) tissue and put them in the trash.

I'm still waiting to confirm complete details about animal testing, but it's a hard thing to find out for sure. While Sir Richard's says they don't test their condoms on animals, apparently in order to get initial approval from the US FDA, Health Canada, and European Union, manufacturers are required to demonstrate that their materials/ingredients are safe to use inside the body, which in some cases involves animal testing. I'll let you know when I find out more on this matter, but in the mean time click here to read about Sir Richard's manufacturer (no mention of animal testing). 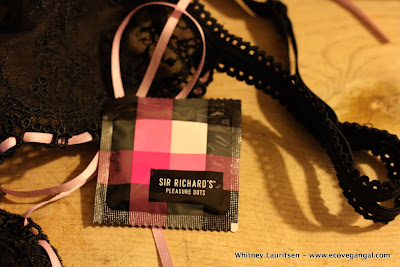 I heard about these condoms in early 2010 and got really excited because they are the first vegan condoms that actually look like fun! Luck would have it that later in the year I was randomly introduced to Mathew by Waylan Lewis (of elephant journal). I got to bring home a few boxes of the condoms and my boyfriend and I gave them a whirl. We tried the Ultra Thin, Classic Ribbed, and Pleasure Dots, and we enjoyed the latter the most. (When it was time to get more I asked my boyfriend which I should buy and he enthusiastically shouted, "DOTS!") However, a friend of mine said her partner prefers the Ultra Thin, so to each their own.

Since I'm sure you're eager to get your paws on a box of Sir Richards, here's how: They're coming soon to a Whole Foods near you. If you can't wait (and I don't blame you), you can pick them up on the Sir Richards website, or through Vegan Essentials, Food Fight!, and even Amazon

. I'm also excited to announce that PETA, who believe that vegetarians have better sex, will be doing a Valentine's Day campaign featuring the condoms, which is sure to be racy in all the best ways.

So what are you waiting for?! Grab a 12 pack and go have some safe sex! Feel free to come back and comment on how it went. ; ) In the meantime, check out more of my thoughts on Sir Richard's here: