A natural war on fleas 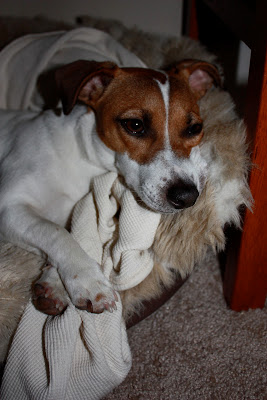 Evie has had fleas off and on since she's been living with me, but they haven't been out of control...until yesterday. The night before I noticed she was scratching a lot, but I figured she might have the usual flea or two. However, the next day I found about 15 on her throughout the course of the day, and she had horrible swelling and welts - this meant war. ***update, just saw the vet and she doesn't think the welts are from fleas, as that's not a typical reaction. she thinks it was a random bug bite or allergy to something in the environment. but back to the fleas...

It's hard to track down the source of fleas. They could have laid eggs in my apartment a while ago and finally hatched. Evie could have caught them from our frequent trips to the dog park. I could have tracked them in on my shoes. Up until now, I was able to control them by spraying her with J&J's Natural Flea & Tick Potion, feeding her PetGuard Yeast and Garlic, and bathing her in Olive green dog lavendar shampoo. However, those weren't enough to control the fleas this time. I suddenly realized that all the specks of black dirt on Evie and in my apartment was not what it seemed - turns out it was flea feces. : ( 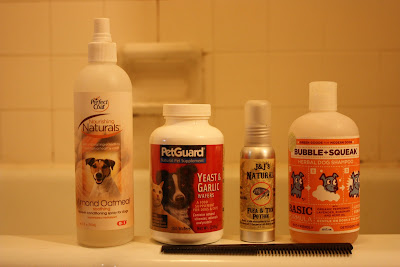 When I found the welts on her I called my amazing vet, Dr. Armaiti May, and she recommended that I give her some children's Benadryl. Believe it or not, this human medication is also safe and effective for dogs, but make sure to consult with your own vet (or Dr. May) before using it. I gave Evie 1 dose of a 12mg tablet every 8 hours, but it didn't seem to do much - she didn't even get too drowsy. I sprayed her with some soothing Almond Oatmeal conditioner (Perfect Coat Nourishing Naturals by 8 in 1) - this seemed to give her some relief (and made her smell wonderful). I've also been giving her extra body massages and back scratches. : )


I gave Evie a bath in the lavender shampoo, used a comb to take out all the fleas, and put them in soapy water (R.I.P. little guys). Then I sprayed her with J & J's and checked her for more of the parasites throughout the day - though I only found a few more, I knew it was only a matter of time before more hatched, so it was time for a new tactic.


No, I did not give her a topical medication like Frontline or Advantage, as I am strongly against those types of chemicals. This may seem strange, as everyone seems to use them and they have the approval of many vets, but I don't trust them. Do a little research and you'll see why I feel this way; here are some articles to check out:

Unless Evie's allergic reaction to fleas becomes dangerous or too uncomfortable, I would rather deal with the parasites on occasion then use a toxic quick-fix product that could have long-term effects on both of our bodies and the environment. So what am I doing instead? In addition to the aforementioned natural products, I am giving diatomaceous earth (DE) a try. This is "a naturally occurring, soft, siliceous sedimentary rock", consisting "of fossilized remains of diatoms, a type of hard-shelled algae" that comes in the form of white powder (Wikipedia). DE naturally kills fleas and other insects by absorbing "lipids from the waxy outer layer of insects' exoskeletons, causing them to dehydrate" (Wikipedia). It also has tiny sharp edges that cuts the pests, but is not harmful to humans or pets. In fact, DE can be sprinkled on dogs' spines as a way of killing off fleas, but people are advised to wear a dust mask during application in order to avoid ingesting it into the lungs. Make sure to buy food grade DE, as it is safer for household usage.

"In tests performed by the USDA, as well as consumer trials, diatomaceous earth has shown to be just as effective as chemical insect control. (eHow.com)"

My friends have had success with diatomaceous earth, and said the main drawback is that it's messy, but I was willing to deal with that. I sprinkled a very thin layer of it on my carpet and furniture tonight, and will vacuum it up in a couple days. Apparently, the flea problem should start to decline within 72 hours, and should be entirely gone within a month. This wait period is exactly why many people resort to the instant gratification of topical flea medications, but I'm going to wait it out and have faith that nature will take its course. I'll keep you posted. 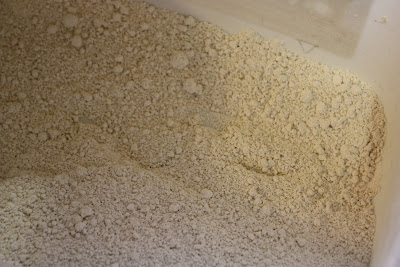 Overall, it seems like the best way to control fleas naturally is to be aggressive with chemical-free products and to check for them everyday. Though we live in a quick-fix society, the dangers and shortened life expectancies are not worth the time we save in the beginning. Remember that the chemicals in the common topical medications can have negative effects on your pet, yourself, and the planet, so I encourage you to take the extra time to try the natural solutions. Besides, this gives you another excuse to pamper and spend time with your pet, which will result in even more of their unconditional love.
Read 5356 times
Tweet

More in this category: « Super canine: what a vegan dog looks like Flea control: update »
back to top

RT @snapshotsofw: Thank you @ecovegangal for introducing me to Mad Tasty! And thank you @RyanTedder for creating my new favorite sparking w…